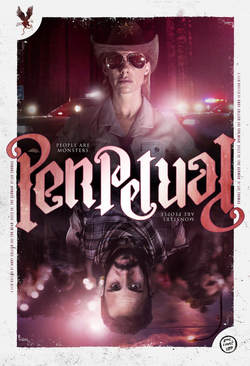 Perpetual is a modern western gothic horror which explores how thin the veneer of civilisation is and how susceptible human nature is to bigotry, violence and evil.  Think "Get Out", but it deals with issues of xenophobia and homophobia instead of racism.  It is set in modern day, small town, Trump's America.  Based on the Lambda award winning novel "The German" by Bram Stoker winner Lee Thomas.

Small town tensions erupt into scenes of vicious vigilante vengeance as a sheriff hunts down a brutal killer who leaves what appear to be Islamist terror calling cards in the remains of his victims.

The story follows three main characters: a "Stranger Things"/"IT" coming of age story, a female sheriff struggling to prevent mob justice and a mysterious Iraqi refugee hiding an impossible past.  These three threads entwine ever more tightly together as the story rushes towards its devastating climax.

Summer 2018. A killer preys on the young men of a quiet western town. The murders are calculated, vicious, and they are just beginning. Sheriff Fran Rabbit and her men are baffled and the community she serves is terrified of the monster lurking their streets. The only clues the killer leaves behind are painted trinket boxes containing notes written in Arabic, insinuating a private Holy War against America. As the panic builds all eyes turn toward a quiet man with secrets of his own. Ziad Al-Ahmadi fled Iraq in 2014. Once a brute, a soldier, a leader of Saddam's genocidal Republican Guard, he has renounced aggression and embraces a peaceful obscurity. But Ziad is haunted by an impossible past. He remembers his own execution and the extremes of sex and violence that led to it.  He remembers the men he led into battle, the men he seduced, and the men who betrayed him. But are these the memories of a man given a second life, or the delusions of a lunatic?

The action takes place mainly in a modern day "unnamed western small town", with short flashback sequences in Saddam era Iraq and modern day Isis era Syria.  The USA location is deliberately never specified.  The film will be shot in and around Payson, Utah.  Payson has a very distinctive small town western aesthetic and has a striking mountain backdrop.  The location will be a character in the movie in its own right.  John Ford meets Hell or High Water.  Crucially, many of Payson's streets appear "unplanned" and ungentrified - a modern family home might sit on a plot next to a more weather beaten old building and then next to a barb-wired lot containing a few horses scratching in the dirt.  This will work perfectly for the story's setting.

From a production point of view, Payson is located within an easy daily commute of Utah's burgeoning production hub in Provo.  Utah is a Right To Work State.  We are working with the kind assistance of the Utah film office, and tax credits are available at a rate of 20% of local spend.